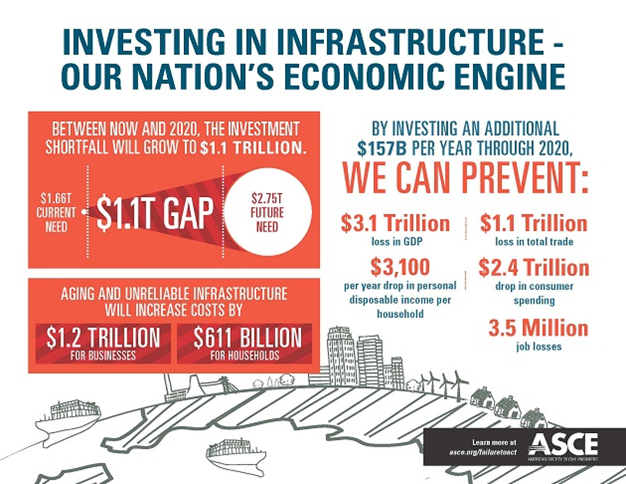 The first, and most important macro trend, is an economic trend that has been on-going for the last 50 years.  Due to a variety of reasons, the federal government, states, counties and cities often do not have financial strength to make the investment needed in public infrastructure.  Combine the lack of funds with the passive, yet critical, nature of infrastructure, and there is little political will to invest in infrastructure.  The American Society of Civil Engineers estimates the total funding gap between estimated public funding and total funding needed to maintain US infrastructure at a “B” grade is over $2 trillion dollars[1].  The infrastructure systems with the largest funding gaps are surface transportation, schools, and public parks & recreation.

In the developing world, the amount of the investment gap is even greater.  With accelerated urbanization in Asia and South America, the need for infrastructure investment is staggering.  Despite significant spending by the central government over the last decade, water scarcity and quality is seriously affecting the standard of living in the entire nation[2].  Similarly, India is at a very early stage in its development of municipal water and waste treatment infrastructure.  Many commercial developments in India include provisions for internal power and water treatment facilities; which deters public investment that would benefit all socio-economic classes.  In Africa, less than 50% of roads are paved, 40% of the population lacks access to safe water, and only 30% of Africans have access to electricity[3].

This trend is shocking considering the critical role that infrastructure plays in the security and growth of societies.  Studies have shown a direct correlation between infrastructure investment and economic growth.  Overall, the combined trends of urban growth and decreased spending have led to a huge funding gap that is expected to continue as long the current technical systems are in place.

The second macro trend supporting my business idea is the increase in private financing of public infrastructure development.  This is a political trend driven by the increasing funding gap (previously described), and lobbying efforts of large engineering/construction firms and institutional investors.  Although common in Europe, Australia and Canada, private investment in public infrastructure through PPP’s has been stymied in the US by the lack of enabling legislature.  However, recent revisions to government codes in 33 states have enabled some form of PPP.  In 200, California approved section 143 of the streets and highways code which allows Caltrans to enter into PPP without legislative approval, and government code 5956 which allows for municipalities to enter into PPP’s through solicited or unsolicited proposals[4].

The enabling legislation has resulted in a slow, but steady, increase in the use of PPP’s for development of infrastructure.  The Congressional budget Office estimates that 30-40% of all new urban highways are funded through PPP’s compared to 1% prior to 1996[5].  PPP’s are also becoming prevalent in the water/sewer sector in form of long-term concession agreements that allow the concessionaire rights to a revenue generated in return for operations and maintenance of all facilities.  In general the political macro trend of enabling legislation along with growing public acceptance of privately operated infrastructure supports the opportunity for helping to enable PPP’s through crowd funded private investment.

The third macro trend supporting my business idea is the technological trend of using internet based platforms for allowing broad based individual investment.  So called “crowd-funding” is currently being applied to the development of charities, small business, social projects, political campaigns and organizational fundraising.  Specifically, sites such as Neighbor.ly and Fundrise have utilized crowdfunding for civic projects and commercial development.  These sites cut-out the middlemen in investment transactions and democratize which projects get developed.  They also give individuals a personal sense of investment in assets that directly affect them.

The increasing use and acceptance of broad, internet-based, individual investment has led to the passing 2012 “JOBS” act which will lift the prohibition on general advertising of an offering for investment and ease the requirements for offering equity investment opportunities to non-accredited investors[6].  Several states have adopted even more exemptions for crowdfunding sites with the hopes of jumstarting equity investment in small business ventures.  Globally, crowdfunding platforms raised $2.7 billion last year; an 81 percent increase over the amount raised in 2011.  However, equity-based crowdfunding accounted for only $116 million, but that figure is expected to accelerate following implementation of the JOBS act by the SEC.

Given these economic, political, and technical macro trends, I believe there is an opportunity for a platform that utilizes crowdfunding to generate private investment in the development of public infrastructure.  The platform would facilitate a link between developers of public infrastructure (municipalities and PPP’s) and individual investors that seek a return on their investment as well as involvement in the resiliency of their community.  The platform will reconstruct market boundaries (public sector access to broad-based private investment), create demand for a non-existent product (individual investment in infrastructure), and return value to all parties involved without any increase in cost.